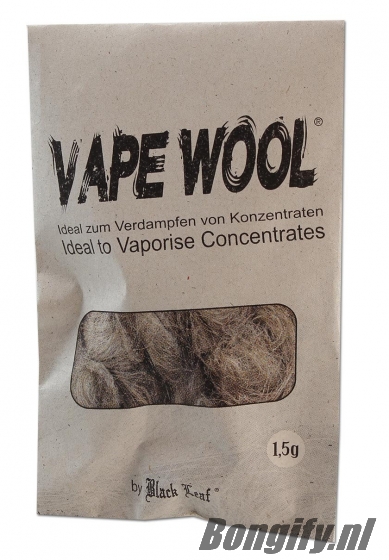 Every seasoned vaper knows that hash and concentrates (wax, dabs) are difficult to evaporate in a vaporizer. As soon as the hashish warms up, it runs together and clumps up. Due to it you can not evaporate it properly because too little surface is available. Sometimes even the vaporizer gets damaged. Usually, you can help yourself by mixing some weed in the hashish to prevent it from converging. But this goes to the detriment of the pure hash or dabs effect and, above all, the pure hashish / concentrate taste. With Vape Wool, this is a problem of the past. The fibres act as a so-called "drip pad", preventing the hashish or concentrate from clogging up or damaging the vaporizer, and enabling the hashish / wax to evaporate properly.

'Vape Wool' hemp fibres are tasteless, and temperature resistant until at least 240° C (464° F). Vape Wool consists of 100% natural hemp fibres which have been degummed and bleached, leaving the fibre soft and receptive like wool. It makes it possible to enjoy the flavour of the pure hashish or concentrate without any compromises!

About The 'Vape Wool' Hemp Fibres for Vaporizing Hash