1  Review Add Your Review
€9.50
In stock
SKU
GF2
Add to Compare
Skip to the end of the images gallery 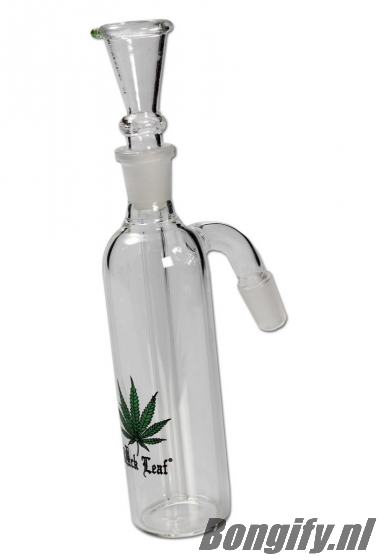 Skip to the beginning of the images gallery
Details
The Bong Pre-Cooler (14,5mm) Black Leaf is a cheap and simple way to improve the quality of your bong smoke. It works as an extra water filter that you can put on your bong, so the smoke gets cooled and filtered by water even before it enters the bong; resulting in an extra smooth, clean and enjoyable smoke!

Pre-Coolers for bongs have some HUGE advantages: they filter the smoke before it enters the bong, which means that many impurities are filtered out by the water in the pre-cooler, and a cleaner smoke goes into the bong. The result of this is a bong that stays much cleaner for much longer, and less cleaning is needed. Most of the "dirty particles", such as tar, remain in the pre-cooler and never even make it to the bong. So you also inhale a cleaner smoke, which means: healthier smoking! But perhaps the biggest advantage is a much smoother, less scratchy smoke. This makes it easier to inhale enormous smoke clouds without coughing!

Black Leaf is a German bong brand that is known for producing some of the most effective, best looking and most affordable bongs and accessories in the world! The brand has been around for decades, and could be considered the best bong brand in the world. Whether you agree or not, it is undeniable that the Black Leaf team consists of some real bong experts who know exactly what a stoner wants. And this bong pre-cooler is no exception: it is simple, effective, and much cheaper than most other pre-coolers!

This particular bong precooler does not have any percolators or diffusers inside. You may think this is a bad thing, but it's also a big advantage for when you want to clean the precooler. When you remove the downpipe / chillum, you can clean it super easily using a bong brush and a little bong cleaner. Isn't that great?! This cheap precooler fits on most bongs with an SG14 (14,5mm) socket, but make sure your bong is tall enough for this pre-cooler to fit.